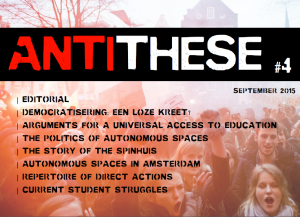 It has now been more than half a year that we saw the consequences of disillusion students organising themselves. The Bungehuis and Maagdenhuis occupations, done by a group of staff and students under the name of De Nieuwe Universiteit, shook awake the governing organs of the University of Amsterdam (UvA) and change was demanded. With the new academic year about to begin, this fourth edition of Antithese offers new students a glimpse into the world of student activism. It aims to introduce key concepts with which we have fought for months now and tries to elucidate them where possible. We then aim to explore how we should set about achieving our demands and reflecting upon what kind of tactics we and other movements are using to empower ourselves.

We invite you to scour through this zine and conceptualise your own thoughts on the university, the education system, and politics in general. It also explains the relation and importance of squatting to student activism. You can find a guide to these spaces in the centre-fold map of Amsterdam’s social squats and centres. In addition to this, we are presenting articles discussing the need for and meaning of democratisation in the university as well as an explanation (taken from the Québec student movement) of the right to free education.

What’s going on at the UvA?

At the beginning of last academic year, many of us had no experience or interest in student activism. However, when the Spinhuis (former and unused anthropology and sociology faculty) was squatted in September 2014 and offered a vast array of activities it so happened that more and more students felt invited to join the struggle. Sometimes this meant just occasionally showing up to lectures or events and sometimes it meant participating in meetings to try and figure out how we could – collectively – make the university (and society) a better place. In November 2014 a similar sentiment to the dissatisfaction that caused the Spinhuis also culminated in the formation of the Humanities Rally action group which began organising demonstrations on a regular basis against the severe and absurd budget cuts to the humanities faculty. From this followed that the mentioned occupations which introduced the concept of direct action to even more people and brought us together in a radical criticism of neoliberal management. During our time in the Maagdenhuis the teachers and staff of the UvA organised themselves into ReThink UvA and together we tried to find ways out of this neoliberal mess. We fought for direct democracy, decentralization and a full decolonization of the university, and we still are. We wanted to redistribute the power from the top to the bottom, and this is still to be done. We wanted that real-estate speculation with regards to university buildings to halt, but it hasn’t. We wanted to stop the corporatisation of the university itself, yet Bungehuis is still sold to SOHO Hotel. Most of all we thought that we could be heard and listened to, but our criticisms and ideas were simply tolerated for public spectacle.

In the end, the UvA’s board of directors tried to pacify us with empty gestures such as having a student representative present at board meetings, installing committees which we believe won’t have any managerial power in the end, and, finally, pressuring Louise Gunning into resigning. But none of these superficial measures are enough. We will not be satisfied with empty gestures, we must enact real, structural change in order to have a truly democratic university – which means that the fight cannot remain confined to the ivory tower of the academy. Let’s take it to the street.

This entry was posted in Archive, General, Publications. Bookmark the permalink.