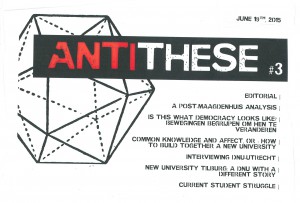 After months of protests, it seems the student movement that emerged from the series of occupations at the University of Amsterdam (UvA) has reached a turning point and could benefit from some in depth self-reflection. The summer is coming, and next September will be a crucial moment in order to see where we are and how we can continue our struggle against the mismanagement of our universities. This third issue of Antithese proposes some starting points to envision the sustainability of the movement. Where our two previous issues clearly aim to document the recent events and reach a broad audience, this third one aims to speak directly to the members of De Nieuwe Universiteit (DNU), hopefully engaging the core group of the movement in a self-critical process.

In order to do so, we publish A post-Maagdenhuis analysis, an essay about the last developments of the movement and some of the pitfalls we are now facing. The text from Ewout van den Berg, concerning other social movements (Occupy Wall Street, Indignados and the student movement in Québec), can be fruitful to look further and plan the sustainable future of DNU. Our editorial team interviewed a member of DNU-Utrecht, to shed light on the development of other DNUs factions. You can also find the speech by Jos Scheren, former occupier of the Maagdenhuis in 1969, held inside the walls of De Verrekijker, the brand new autonomous café opened up by DNU-VU. Lastly, you can follow the updates on the current student struggles worldwide.

We hope this issue will help to situate the movement in a broader context and wish to all “professional” activists a peaceful summer. See you around the Climate Games and surely for the next round of our struggle, starting in September 2015!

This entry was posted in General, Publications. Bookmark the permalink.