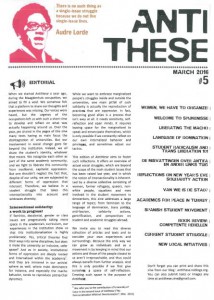 When we started Antithese a year ago, during the Maagdenhuis occupation, we aimed to fill a void. We somehow felt that a platform to share our thought and experience was missing. Our voices were heard, but the urgency of the occupations left us with such a short time to develop and reflect on what was actually happening around us. Over the year, we shared in the pages of this zine many texts having as main focus the disintegration of universities. But our involvement in social change goes far beyond the institution. Indeed, we all share the student’s identity, whatever that means. We recognize each other as part of the same academic community, and we fight to liberate this community from neoliberal, capitalist oppression. But one shouldn’t neglect the fact that, despite of our unity, we are subjected to different forms of oppression that intersect. Therefore, we believe in a student struggle that takes this intersectionality into account and embraces diversity.

Intersectional solidarity: a work in progress!
If feminist, decolonial, gender or class issues are progressively taking more space in the academia’s curriculum, our experiences in the institution show us that this institutionalisation is highly problematic. Yes, critical theories find their ways into some disciplines, but does it make the university an inclusive, safer space? Just as in society, institutional forms of oppression are deeply rooted and internalized within the
academia. They are mirrored in our activist sphere as well, where male dominance for instance, and especially the macho behaviour, tends to reproduce patriarchal dynamics.

While we want to embrace marginalized people’s struggles inside and outside the universities, one main pitfall of such solidarity is actually the reproduction of practices that are oppressive. In fact, becoming good allies is a process that isn’t easy at all. It needs sensibility, self-reflection and open minds. It requires leaving space for the marginalized to speak and emancipate themselves, which is only possible if we constantly reflect on our own internalized behaviour and privileges, and sometimes adjust our tactics. In order to foster such reflection, we propose to have a look at what is being done by feminist student activists in Québec, where non-mixed committees came up as a potential solution, or at least as a necessity to cope male dominance. We also chose to publish the reflection of an affinity group from Amsterdam that questions the notion of intersectional solidarity in relation to the last noise demonstration in support of undocumented people at Schipol detention center.

Besides these self-reflective contributions, this issue of Antithese aims to offer an overview of actual social struggles which are beyond the scope of the main student issues that has been raised last year. Led by a diverse collective consisting of queers, women, former refugees, non-white people, squatters and men involved in the student movement in Amsterdam, this zine addresses a large range of topics, from the feminist response to Geert Wilder and the anti-fascist mobilization against PEGIDA, to the accelerated gentrification of Amsterdam and the Academic for Peace movement in Turkey.

We invite you to read this diverse set of articles and texts and to reflect upon your own experiences and surroundings. Because the only way we can grow and maintain our movement is by reflecting on our actions and those of the people closest to us.

This entry was posted in General, Publications and tagged antithese, intersectionality. Bookmark the permalink.